Heeey Whats good y'all! check out this new goodness from the homie @SkyZoo. This is the lead single from his upcoming 8 track EP "Peddler Themes" Produced by !llmind wit cuts from DJ Afar and cover art by Emmanuel Everett. Peddler Themes drops July 21st via FGR Inc. #- BooM

The late great Prodigy (feels weird typng that) talks about helping his community and Illuminati within the HipHop culture and more check it out! - #RIPPRodigy #BooM
Uploaded by DJ Nia Boom No comments:

I knew he made hits but damn! Scott Storch created an entire wave. I thought it was gonna be corny and it kind of was, too many music videos but overall I enjoyed it learned a lot about this, dare I say genius... I really didnt realize he contributed so much to the culture. From his early beginnings with the "Roots" to landing hundreds of # 1's on the billboard charts Storch has seen and done it all but looks like he might have more up his sleeve, well see - BooM
Uploaded by DJ Nia Boom No comments: 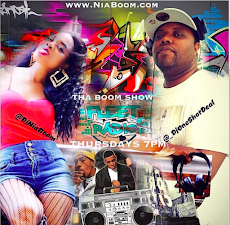