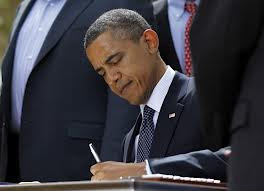 
Question: Mr. President, to your question, what could you do - first of all, couldn’t you just have them down here and refuse to let them leave the room until you have a deal? (Laughter.)

Obama: I mean, Jessica, I am not a dictator. I’m the President. So, ultimately, if Mitch McConnell or John Boehner say, we need to go to catch a plane, I can't have Secret Service block the doorway, right? So -

Question: But isn’t that part of leadership? I’m sorry to interrupt, but isn’t –

Obama: I understand. And I know that this has been some of the conventional wisdom that's been floating around Washington that somehow, even though most people agree that I’m being reasonable, that most people agree I’m presenting a fair deal, the fact that they don't take it means that I should somehow do a Jedi mind-meld with these folks and convince them to do what’s right. Well, they're elected. We have a constitutional system of government. The Speaker of the House and the leader of the Senate and all those folks have responsibilities.
Uploaded by DJ Nia Boom