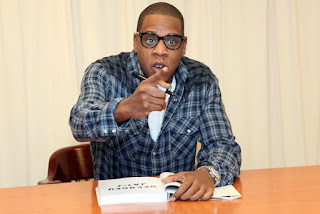 Hip-Hop Mogul Jay-Z has been slapped with a lawsuit by a man who claims that sections of the Throne rapper’s 2010 book ‘Decoded’ were in some way stolen from him, reports AllHipHop.com.
In a handwritten lawsuit, filed on June 13th in California, Patrick White asserts that his laptop was stolen in 2009 and somehow his information from the computer now appears in Hov’s lyrics book. “The book contains various expressions, colors, phrases, which correlates to my work,” he scribbles in his lawsuit.White is suing for copyright infringement and invasion of public property. He is also seeking statutory damages related to the profits of the book.We doubt that this lawsuit has any merit, considering that ‘Decoded’ is mostly a song book of Jay-Z’s self-penned (or memorized) rhymes that he has recorded over his illustrious career. We are quite sure that Hov will brush this lawsuit over his shoulders.