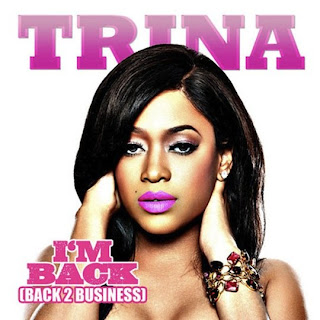 In preparation for her upcoming sixth studio album, Trina released a mixtape entitled Diamonds Are Forever on March 28, 2011.Prior to the full release, Trina released three singles from the mixtape, which includes "Ghetto" featuring T-Pain, "Waist So Skinny" featuring Rick Ross, and "Can I" featuring Mya. The Mixtape was successful, receiving 4.8 million views in two days.In a recent interview with  MTV UK, Trina says that her sixth album is expected to be out by the end of the year and that there will be more pop/crossover music on the album. On Memorial Day 2012, Trina released "I'm Back (Back 2 Business)" via iTunes in preparation for another mixtape before her sixth studio album.
On July 4, 2012, Trina released "Beam" via Twitter featuring GunPlay from MMG and Ice Berg, as well as a remix from her mixtape Diamonds Are Forever, "Bad Bitch", featuring Lola and Shawnna. Trina's highly anticipated mixtape Back2Business was supposed to be released on September 28, 2012, but she decided to instead release it mixtape on December 3
Trina will be a co-host on Tameka Harris' (Tiny) upcoming late night talk show Tiny Tonight alongside singer/reality star Tamar Braxton, Claudia Jordan and Cottle herself.
Uploaded by DJ Nia Boom